The Muslim Family and Its Role within Society 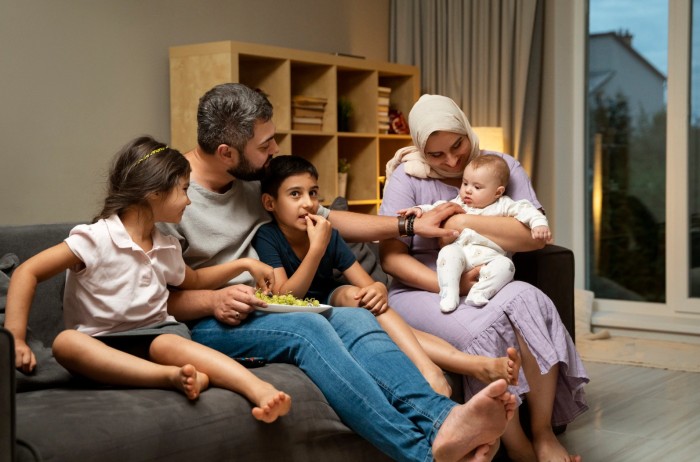 As the world’s second-largest religious group and a significant community in the United States, learning Islamic views about family can help us understand and be more compassionate to one another.

In Islamic society, family is the single most important cornerstone and extended families are necessary for the upbringing of healthy children.

More recently, traditional Muslim families are challenged by generational gaps and a growing trend towards nuclear families instead of extended ones. Based on traditional ideologies, assigning less importance to extended families leads to suffering and isolation. Meanwhile, the generational gap sees Muslims veering away from older generations as well as traditional customs and values.

Join us as we explore traditional concepts of family in Muslim culture and how they’re influenced by modern-day society.

It is common for Muslim families to have large families that span up to three generations. This provides security and support, especially in times of uncertainty.

Respect is earned with age since experience and wisdom are attributed to more years spent living. Caring for your parents and the elderly in their later years is considered an opportunity from Allah.

The family is headed by patriarchs who strive to maintain ideal families. They spread their values not only within the family but to everyone who comes in contact with it. It is believed that a family that eats and prays together stays together. A patriarchal family head who does not carry out his duties can be prosecuted under the Shari’ah.

Here are some of the challenges faced by modern Muslim families:

Despite these challenges, the family remains an important social structure for Muslims.

There is strong segregation between legitimate and illegitimate relationships in Islam. Premarital sex is strongly discouraged. Love and bonding are expected to develop after marriage.

Before the couple is married, the two families bond while physical contact between members of the opposite sex is frowned upon. This is the reason a lot of patients prefer doctors and clinicians of the same sex, especially in cases concerning gynecology.

Islam has its share of controversial marital customs. While they may have been traditionally practiced, modern-day views are quickly making them outdated and minimizing the number of people who still engage in them. Here are a few examples:

Intermarriage among Muslim families used to be prevalent. However, since it creates a smaller gene pool that is unhealthy from a medical standpoint, this isn’t practiced as much among modern Muslims.

In some African countries with a vast Muslim population, female genital mutilation is an ongoing practice. Despite female genital mutilation’s frequent association with Islam, many Islamic organizations and individuals have spoken up and contested this popular assumption. According to one writer who spent several years in countries with large Muslim populations, “There are no instructions in the Holy Qur’an or in the traditions of the Holy Prophet (sa) that command Muslims to circumcise their daughters.”

In Islam, sex between a married man and woman is regarded as an enjoyable activity that has the blessings of Allah. Homosexual interactions are discouraged.

While this is true throughout the world, it does not mean that Muslims discriminate against those who have made this choice. On the contrary, it is advised, on the part of the entire community, that all people, regardless of sex, creed, or gender, be treated with respect and love.

According to Allah SWT, we are to help one another so that we may receive infinite rewards in this life or the afterlife. This is why helping families in conflict and disaster-ridden areas like Pakistan, Jordan, and Gaza is an important initiative for IMANA.

If you would like to be part of IMANA’s outreach efforts, you can visit the IMANA website, volunteer, and find other ways of supporting us.